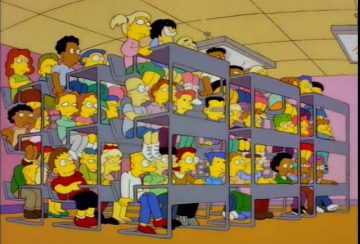 The heads of students in Aviator Fields, a new development south of Point Cook, will soon be bursting with brains after the State Government announced a new school for the area to be built in 2038.

The new school is expected to provide relief to families in the area that is soon to be the site of thousands of new homes as Point Cook continues to attract families to Melbourne’s west in much the same way feces left in the hot sun attracts flies.

“We’ve managed to identify a site for a new school,” the Member for Altona whom locals were unable to positively identify said in a telephone interview, “and we have just begun negotiating for the purchase of the site” which is a pretty fucking stupid thing to be saying really given her Government has literally just green-lit the development of the place into housing from its previous green wedge status.

“This is in contrast to the former Government who completely failed to plan for the local community’s needs” she continued, seemingly buoyed by the notion that her party has only held Government for sixteen of the last twenty years. She probably had a lot more to say after this, but she lives a long way away and STD calls are expensive.

Aviator Fields planning consultant John Wiener was on-hand at the media call to explain the finer details of what he called “a great gift to the community”. When asked what residents are meant to do between now and 2038 he explained; “We kind-of figured with the lack of local pediatric medical facilities, the crime rate, and general anti-vaxxer nonsense that goes on in the Point Cook region that in the meantime the problem would basically solve itself for a while”.

“If those things don’t get them, surely the quality of the local drivers will.” he said, in a reference to the legendary ability for drivers in Point Cook to forget which side of the road to drive on, how to use a roundabout, how to turn on their headlights at night, and how to do the speed limit in the right-hand lane, whilst still feeling qualified to lecture others about road law on Facebook.

Unofficially, Government sources say that they don’t expect many families with school-aged children to move to Aviator Fields early-on. This is of course a perfectly reasonable thing to expect given that the 2016 Census showed that in Point Cook 87.5% of homes were occupied by families and two thirds of those had children. But, judging by the quality of the content in the local Facebook groups we’re sure the kids will be just fine being home-schooled until 2038…