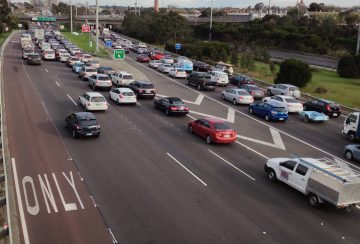 “Our plan for Aviators Field will identify essential infrastructure required by the new community, including bike paths, town centres and open space”, she said.

Potential transport solutions would also be identified during the process, Ms Rhodes said.

Now, I’m sure you’re as thrilled as we are that the VPA is going above and beyond to consider such weighty issues as bike paths, town centres and open space (one must assume those will fall somewhere after “air” and “dirt” on their list of essential infrastructure) but for those more interested in the potential transport solutions we’ve compiled a list of the VPA’s top 6 ways out of Aviator Fields Point Cook.

It seems so obvious when you think about it – why not swim to the city?

After seeing the success of the Pier to Pub at Lorne the VPA has decided – despite the fact that Point Cook has neither a pier nor a pub – that swimming is the way of the future for Aviator Fields.

Despite popular conjecture suggesting that much of the Point Cook population are at risk of drowning in a pot-hole in the event of a moderate rain shower (see: Sneydes Road) the VPA has committed to a crack life-saving team on duty at least one day a week. In an exciting turn we are told that one of these life-savers even qualified for their Bronze Medallion when they were 12 years old, which we are fairly sure certifies someone to save you from drowning in a hand basin.

This one is not as far-fetched as it sounds because – get this – there’s actually an airport nearby. I know, right?

Just imagine – you could spend five days a week flying to and from work and the other two days writing angry letters to the media about the noise of the planes flying over your house.

Now, the only fly in the ointment is that the airport at Point Cook is a RAAF air base so you’re not technically allowed to fly in and out of there as a civilian, but the air-force looks like a bunch of guys who like to party (disclosure: we haven’t seen Top Gun but we heard someone else talking about it one day). Who wouldn’t not like all the benefits of living next to an airport that you’re not allowed to use? I, er, us… I guess?

Granted, the only airport you’re going to be allowed to land at is going to be Essendon, but it’s not like there’s ever been a problem with a plane trip going wrong at Essendon Airport. What was that place called again… Essendon Fields or something? But I think everybody here can agree that the Tulla is always going to be an easier commute than the Westgate.

No longer the sole-domain of childless, pale men at the office named Andrew – the humble bicycle has come a long way as a preferred method of commuting.

After all, who wouldn’t relish the thought of a casual two-hour each-way commute to the city? As an additional bonus – did you know that active-wear can also be worn outside of the local supermarket? Recent sweeping reforms by the Government have paved the way for lycra to be worn in all sorts of situations from riding a bicycle through to attending school events. What a time to be alive.

No need to stress about getting your suit all sweaty – since there’s no schools in Aviator Fields the only time you’ll be needing a suit is for a court attendance.

After all, what are the odds that one of the highly skilled car drivers in Point Cook might make a mistake with the road-rules and hit you? Never happens.

It’s a little known fact that you do not need a license in order to fly a hot air balloon. Well, maybe you do but who is going to stop you? Balloon Cops? Aviator Fields doesn’t even have non-balloon cops.

One of the most common issues we hear in Aviator Fields is that it costs money to run a hot air balloon, but we disagree. Key to the cost-free operation of such an airship is a ready supply of hot air. Thankfully an apparently inexhaustible supply of hot air has been identified at the offices of the VPA, with a secondary (and much larger) deposit found on Spring St. By our estimate this hot air should last for at least the next four years.

What better way is there to look like a proper olden-days super-villain like Lex Luthor or Magneto than from the comfort of your own hot air balloon where you can twist your thin mustache and sneer at the commoners? Well, I guess you could buy a Ferrari and a Council election I suppose… Come to think of it, which one do you think would be cheaper to buy?

Have you ever sat on a park bench and thought “This is great and all but I wish it smelled like someone’s armpit, took forever, and dislocated my spine”? Well, if a taxi is too expensive you could always just catch the train.

The VPA has determined that they want to encourage the use of public transport for journeys wherever possible, so as a result they will not be providing any additional parking at the railway station. Granted, without your car you can’t actually get to the public transport but the VPA is resolute that if you’re going to be a jerk and drive for 5% of your journey they aren’t interested in people like you travelling the other 95% on public transport. After all, you driving that 5% is contributing to the traffic, right? Perfectly logical.

Falling somewhere on your list of enjoyable activities in between “repeatedly slamming your genitalia in a car door on a cold morning” and “binge watching My Kitchen Rules” is driving from Point Cook to the city.

Best of all, you don’t even need to own a car in Aviator Fields. Simply sneak into a house at 5am while the occupants are asleep and steal their keys, and then head to the local servo. After a quick petrol drive-off you’re ready for work. Parking is easy on the way home – peg it through a roundabout at 110km/h and park it in the living room of the place on the corner. Not guilty, your honour!

You’d think in an area with so few sets of traffic lights (and so few people willing to stop at them) that traffic might move quickly, but you’d be mistaken. A little known fact about Point Cook is that the intersection of Sneydes and Hackett’s road is responsible for more accidents than the Guns and Roses concert of ’93. People have celebrated entire birthdays stuck in Point Cook traffic. Unfortunately many of them were very first birthdays, and that stuff is hell on the leather.

We hope this advice from the VPA has helped cement your decision to join us at Aviator Fields.